Purpose: Computer simulation of biological phenomena is an important and growing part of biological research, but students in the life sciences often shy away from using math and computer science as tools to study biology.
The goal of Simulation in Biology is to show you how useful simulation is in understanding biology, and to convince you that anyone can learn to do it!
Through the use of the graphic programming languages StarLogo Nova (SLN) and StarLogo The Next Generation (TNG) biology students learn to design, construct, and evaluate simulations of biological phenomena using autonomous agents.  StarLogo allows many possible implementations of biology—agents may be chosen to represent molecules, cells, or organisms—and the model scenario could be virtually anything, including enzyme kinetics, cells growing in culture, cells interacting in an organism, or organisms interacting with each other and their environment. 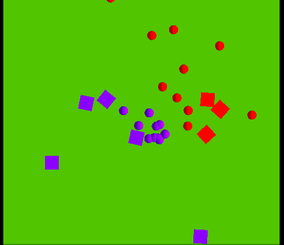 Name: Corita Miles
Title: The social behavior of gangs
Description: This simulation will show how simple rules of logic create complex social behaviors among gang members.The agents have the ability to tag buildings, and take over territories of the opposing gang.
​ 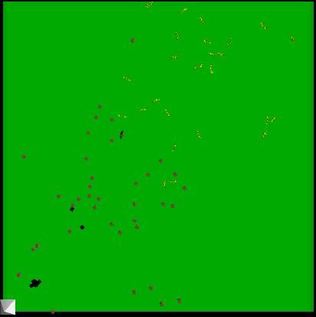 Name: Jonathan Benney
Title: Comparing Pollination With and Without Communication of Honey Bees
Description: There are actually two similar simulations being compared. One where bees fly around randomly and eventually fly close enough to visualize flowers to pollinate them. The other simulation is where bees can communicate with other bees via color change and direct them towards a group of flowers. They are being compared by the rate at which they acquire nectar, and it is predicted that communication will play an important factor in increasing rate at nectar collection. 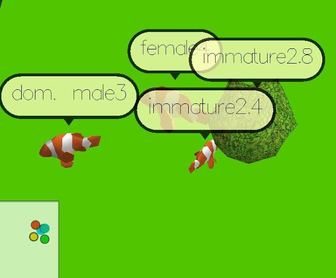 Name: Joel Rosen
Titile: Social Hierarchy in Clownfish
Description: Clownfish exist in very interesting social groups in the wild – the dominant / highest-ranked fish is a female, the second-ranked fish is a male, and the rest remain sexually immature males, all waiting for a chance to rank themselves up.  If the female dies, the male will become the dominant female fish, and the highest rank immature male will mature into the dominant male of the group.  My goal was to model this accurately based off environmental sensing rather than collision, to try to accurately reflect the factors like chemical cues, vision, displays of aggression, etc., that fish will use to establish their social order. 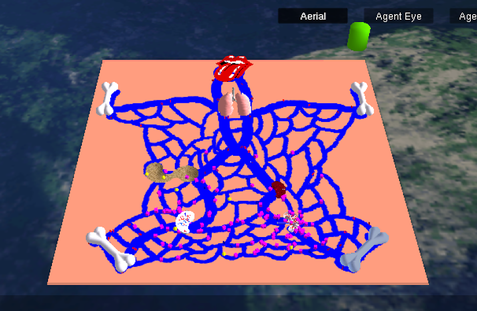 Name: Jennifer Saldana
Title: The Erythrocyte Cycle and Regulation
Description: The purpose of this simulation is to observe the erythrocyte cycle and regulation. Erythrocytes are highly regulated by hormone Erythropoietin and transmembrane protein transferrin that binds to iron molecules. During this simulation red blood cells travel along a path delivering oxygen and iron to organs such as the liver, spleen, kidneys, bone marrow and lungs.

Name: Rebecca Cortazio
Title: Ebola Outbreak
​Description: This project is simulating an Ebola outbreak. In it there are quarantines, a place used for medical isolation, and three different types of individuals: healthy, sick, and immune. The simulation shows that by having more available quarantines the population survival rate goes up during the outbreak. 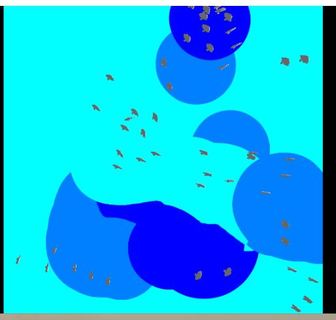 Name: Kelsie Leonard
Title: F.I.S.H. (Fish In Shadowy Havens)
Description: FISH models the schooling behavior of golden sided shiners. In particular FISH focuses on the shiners' preference to congregate in darker regions of water and how this preference effects the fraction of fish who are found in those regions at any given time. FISH also explores the relationship of the social aspect of schooling in comparison with the shiners' terrain preference.
Name: Adeeba Nahrin
Title: Antibody mediated Immune response
Description: Bacteria attack the white blood cells and activate them. Activated white blood cells find the correct T cells and activate them. Activated T cells stimulates the correct B cells and these activated B cells give rise to plasma B cells and memory B cells. Plasma B cells give rise to antibody which kills the bacteria and memory B cells float around so that if the cells are attacked by the same bacteria again then it can produce antibodies to kill the bacteria lot faster than before.
Name: Monica Elias
Title: Fish Behavior Based on Vectors and Terrain Shape Manipulation (Dark vs. Light)
Description: This simulation shows how changing the terrain area where the dark that is represented by the black patches and light that is represented by the yellow patches, affects the behavior of fish. Experiments were done where the patches were different shapes. The ratio of light and dark was another consideration. Overall the fish tend to behave differently. Through the data collected there are statistics to support this statement. 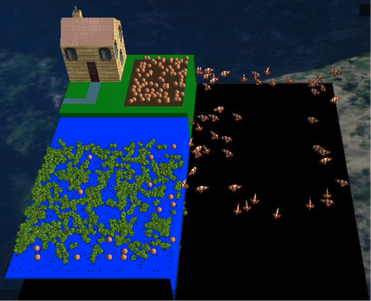 Name: Linda Tran
Title: Eutrophication: Too Much of a Good Thing
Description: Eutrophication is a process in which nutrients from runoff, typically from farms, are dumped into a water system. This sets off an algal bloom and triggers an explosion in bacteria population which drains the oxygen levels in the water and as a result, fishes die off as oxygen levels decrease. To find a balance in the system, a slider gauge can be used to manipulate the amount of nutrients being dumped in the system.

Name: Abigail Lorenzo
Title: Sea Otter-A Keystone Predator
Description: My simulation shows the effect that the sea otter species has on the kelp forest environment. When the keystone predator is gone, the kelp forest should be greatly affected. 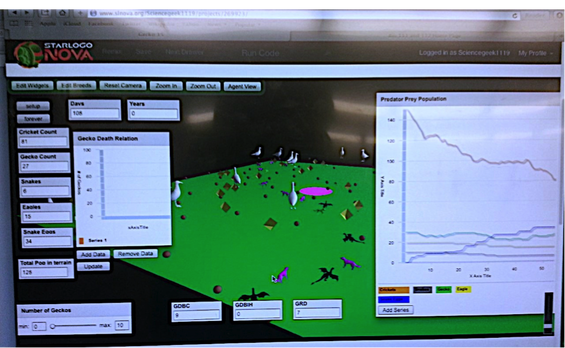 Name: Shawn Andrews
Title: G.E.C.K.O. (Gecko Energy Control and Keystone Organisms)
Description: The goal of this program is to depict the natural order of the relationship between four animals, two types of prey and two different predators. Based on specific defense for the prey they will have different chances of evading their pursuer. The idea is to simulate as close as possible what would occur in their natural habitat and map the animal’s paths of movement based on the environmental makeup, such as prey camouflaging to basic colors dependent on its surroundings.
The agents in this ecosystem are as follows in ascending order of their level in the food chain: cricket, gecko, snake, and large birds. In nature just because a predator is king of the food chain doesn’t just entail that it will simply find food easily and without failure. Through evolution prey develop defenses based on their predator to help increase their chances of survival.  I will know when the program is working as there will be a maintained environment where one agent does not simply take over, and if graphed will follow a basic Predator-prey model based on population. 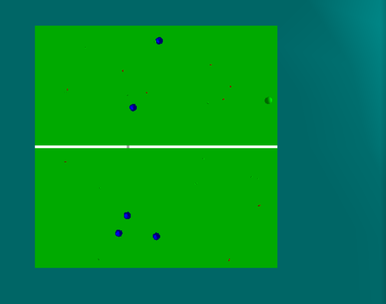 Name: Alex Kritikos
Title: The Zika Takeover
Description: This code simulates the life of the Zika virus expanding to different populations and different areas around the world. The mosquitoes carry the virus spreading it across different planes. One mosquito can affect any human and can eventually kill off the human population.

Name: Garry Quirici
Title: Simulating Sneezing: Predicting Disease Spread
Description: My simulation is designed to represent the spread of disease through sneezing.  The main elements to my simulation are the “Infected” who are red fireballs that sneeze small red spheres while they are sick, simulating their infectious phase.  The small yellow pyramids are the “UMASSers” who represent students and faculty in the classroom who are susceptible to disease.  The large yellow pyramids represent people who have gone through the disease and developed an immunity, keeping them from getting reinfected!

​​Name: Rose Bennett
Title: Biological Circadian Rhythms
Description: My environment is composed of a few special “Wabbits”, each of them is as unique as real living mammals with biologically composed circadian rhythms. Circadian rhythms direct our sleep/wake cycles along with all other cyclical, time sensitive processes in the animal body: cell cycles, hormone feedback loops, digestion, menstruation, etc. I am simulating wabbits activity within different conditions like constant darkness where their rhythms would run endogenously different from 24 hours, light pulses which affect their onsets, and Entrainment to a natural 24 light/dark period.
Powered by